A preprint denying the BCG hypothesis with the data of Sweden

Here comes another preprint denying the BCG hypothesis by comparing age group in the same country, Sweden, this time. This method is flawed as it ignores the external immunity effect which is much larger than the individual immunity effect.

The BCG vaccine does not protect against COVID-19. Evidence from a natural experiment in Sweden
https://arxiv.org/abs/2006.05504

This preprint concludes that the BCG vaccine has no effect against COVID-19 since there is no difference in cases per 1,000 inhabitants before and after 1975 when Sweden stopped its universal BCG vaccination program.

However, this preprint also says it is hard to conclude from the death tolls as the mortality rate increases by age. Here is the figure of this preprint about the deaths per 1,000 inhabitants. Please look at this carefully.

As the preprint stated, Sweden had its universal BCG vaccination program from the 1940s to 1975. This means that from Swedish who are from 45 to around 75 years old were BCG vaccinated.

I categorize the age groups into 0-39 (non-BCG), 40-79 (mostly BCG), 80+ (non-BCG), and compare Sweden with Italy where BCG vaccination has never been compulsory.

Firstly, the below chart is deaths per 1M population by the age group. While the total death per 1M population is 534 for Italy and 480 for Sweden, the death rate for 80+ is higher in Sweden. This may be partially due to the failure to protect aging care facilities in Sweden. Another reason is that the percentage of 90+ among 80+ in Sweden is a little higher than that in Italy.

The second chart is relative deaths per 1M pop by age group, setting 80+ death per 1M population to 100 to compare the age group difference relatively as most of 80+ in Sweden or Italy have not been BCG vaccinated.

BCG vaccinated generation (from 45 - around 75 years old) of Swedish has lower relative death rate comparing with Italy. This fact validates the BCG hypothesis.


(Added on 22 June)
Some people claim that Sweden should be compared with the other Nordic countries; Norway and Finland.
Let's look into their BCG policy.
Then, I create the three same charts adding Norway and Finland.
From the charts, you can see;
Sources:
https://en.wikipedia.org/wiki/2020_coronavirus_pandemic_in_Italy#By_gender_and_age
3 June 2020
https://www.folkhalsomyndigheten.se/smittskydd-beredskap/utbrott/aktuella-utbrott/covid-19/bekraftade-fall-i-sverige/
11 June 2020
https://www.fhi.no/en/id/infectious-diseases/coronavirus/daily-reports/daily-reports-COVID19/
20 May 2020
https://thl.fi/en/web/infectious-diseases/what-s-new/coronavirus-covid-19-latest-updates/situation-update-on-coronavirus
19 May 2020; The death number for under 49 yrs is only available, which is 6. I attributed 5 to 40-49 yrs and 1 to 30-39 yrs old.
https://experience.arcgis.com/experience/92e9bb33fac744c9a084381fc35aa3c7
https://www.populationpyramid.net/
coronavirus

Popular posts from this blog

(COMMENTS reached the max) If I were North American/West European/Australian, I would take BCG vaccination now against the novel coronavirus pandemic. 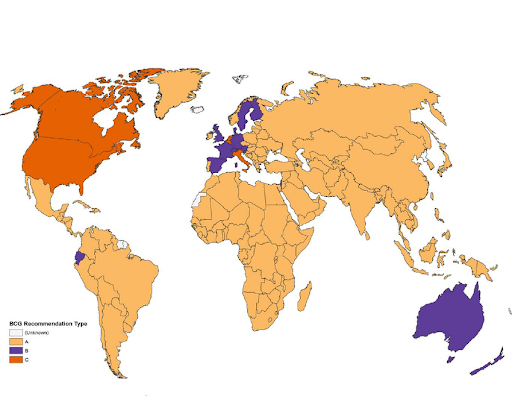 I am not a medical expert and this is just a hypothesis; taking BCG vaccination may strengthen immune to the novel coronavirus. If I were American/West European/Australian, I would take BCG vaccination now. Six reasons follow. I declare that there is no conflict of interest for BCG vaccination but I have a big interest in stopping this pandemic. One of my businesses is an online tourism agency and its sales have dried up! (Added on 4 Apr) The comment system does not work on this post anymore. Too many comments? For discussion purposes, I created  a new post . Please leave a comment on the post below. https://www.jsatonotes.com/2020/04/please-leave-comments-here-regarding.html 1) Scientists have started to work on this hypothesis Can a century-old TB vaccine steel the immune system against the new coronavirus? https://www.sciencemag.org/ news/2020/03/can-century-old- tb-vaccine-steel-immune- system-against-new-coronavirus (Added on 9 Apr) They seem to use on
Read more

Please leave comments here regarding the BCG hypothesis, the correlation between COVID-19 and BCG vaccination

There have come many comments on the previous post and new comments don't seem to get published anymore. From the initial, some of the comments didn't get published properly. I guess Google is not working on this Blogger seriously. Please leave your comments/inputs here regarding the BCG hypothesis, the correlation between COVID-19 and BCG vaccination. Please be aware that the Blogger comment system seems buggy and some comments don't get published. I try to check the incoming comments and post the comments if I notice they are not published, but I'm not perfect and my time is limited on this. Additional information for reference Germany table was updated on 4 Apr by @takainou_0907 .  https://twitter.com/takainou_0907/status/1246684588287488000 (Added on 6 Apr) Another pre-print article was published regarding the correlation between COVID-19 and BCG vaccine. This pre-print article cites my previous post.   https://www.medrxiv.org/content/10.11
Read more

COVID-19 and the BCG hypothesis: age group comparison between Italy, Spain, and Portugal. You can get a size sense of herd immunity and individual immunity effect.

April 13, 2020
This is a supplement analysis of the previous post . Supplement but important because this is the first analysis  in the world  that quantifies the difference of people who were vaccinated and those who were not in the same countries. The age group comparison between Italy, Spain, and Portugal should be interesting because three countries had different BCG policies and the same strain, BCG Denmark has been used.  Let me look back at and dig into the detail of the BCG policy for each country. Italy: never mandatory Spain: mandatory from 1965 to 1981 for newborns from  http://www.bcgatlas.org/ . But the BCG Atlas is incomplete again. Schoolchildren from 6 to 14 years old had vaccinated from 1965 to 1976*. From 1956 to 1965, 80% of children who were 5 to 14 years old were vaccinated**. -> Spanish from 39 to 78 years old has been vaccinated. Portugal: mandatory from 1965 to 2017 for newborns from  http://www.bcgatlas.org/ . And I guess same schoolchildren vaccination for Portugues
Read more

Jun Sato
I am a middle-aged Japanese male, brought up in Tokyo and moved to Brisbane at the end of 2017. I started my career at the Tokyo office of a global consulting firm and dived into a bank turnaround and launching its internet channel. I've started my own business and consulting in 2006 without VC funding and have grown it to around $10M revenue. I'm very open to new business/consulting inquiries to survive next year and next decade.